What does it mean to fear God?  Do you believe it means respect?  Does it actually mean to be afraid of God?  We have heard the phrase, “That put the fear of God in them.”  Usually stated after some big event has happened in a person’s life.  Did they start to look at God’s Word more closely?  Did they start to obey?  I think that there are different aspects to the words, “The Fear of God.”  Let’s explore a couple.

In Genesis 20th chapter, we read that Abraham moved from his homeland to the region of Negev.  As he entered the country, Abraham thought that they didn’t fear God because of the peoples actions.  They didn’t fear the righteous law that God had established for man.  Abraham feared for his life because Sarah, his wife, was beautiful.  Abraham thought they would kill him so that they could have Sarah for their own.  So, Abraham told Sarah to lie to the people and say Abraham was her brother.  The King of that land, Abimelek, took Sarah for his own and God was displeased.  God came to Abimelek in a dream and said, “You are as good as dead because of the woman you have taken; she is a married woman.”  Genesis  20:3 NIV  As soon as Abimelek had the dream, he quizzed Abraham and found the truth and returned Sarah back to Abraham.  Abraham was just as guilty of not “honoring” or fearing God as much as the people of Negev.

The above is an example of being  in fear of God because of what He can do to you.   God will give ultimate judgement someday.  In Romans 14:11 says, “‘As surely as I live,’ says the Lord, ‘every knee will bow before me; every tongue will acknowledge God.'”  So then, each of us will give an account of ourselves to God.  NIV   We fear God because of His righteous judgement that is to come.  We call that day –  judgement day.  When we do something bad, we should feel guilty.  We have done something wrong.  It may have been against a person or we have harmed a group of people.  We should feel remorse for those people we’ve hurt.  However, the greater guilt should be that we went against God’s will for our lives. 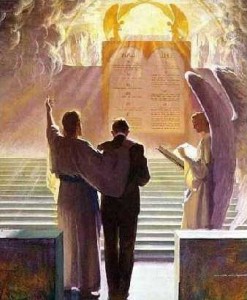 The second idea that I believe is related to Fearing God is to give God his due respect.  Look at the story of Job.  Who are we to question God?  Job did and look at the answer God gave.  He is due all respect and honor.  His name should be held in high regard and position.  God is the creator of all things including you and me.

In our society, the Fear of God is not known.  If people had the fear of God, they wouldn’t do what they do.  They think they can get by with anything as long as they don’t get caught.  In actuality, all actions of mankind are seen.  Consider what is written in Psalms 33:13-15.  This is a powerful passage of scripture and cannot be overlooked.  “From heaven the Lord looks down and sees all mankind; from his dwelling place he watches all who live on earth – he who forms the hearts of all, who considers everything they do.”  NIV  Who is watching?  Not your neighbor or the police.  God is watching and He is watching all that we do.

How should we live our lives?  By fearing God.