Satan is the father of all lies.  Jesus spoke these words about the Devil written in John, “He (Satan) was a murderer from the beginning, and does not stand in the truth because there is no truth in him.  Whenever he speaks a lie, he speaks from his own nature, for he is a liar and the father of lies.”  John 8:44 NIV.  What are some of the ideas that Satan wants you to believe?  Here are three lies I believe that Satan wants you to believe.

Various polls have asked the question over the years, “Do you believe God exists?” to a variety of people.  The percentages fluctuate over the years, however most people believe in God.  For example, in 2005, a Cambridge University poll said approximately 88 percent of the world’s population “believe in God”.  This is down from 96 percent in the year 2000.  Satan is having a hard time convincing people that God doesn’t exist. I believe this to be the case because God’s creation, our lives, our experiences gives us the idea that God does exists.  The Word in Romans 1:20 says, “For since the creation of the world God’s invisible qualities – his eternal power and divine nature – have been clearly seen, being understood from what has been made, so that people are without excuse.” – NIV  This scripture teaches that God can be seen, in His creation, without reading the Bible.

Also I believe we are hard wired by our Creator to seek Him.

“My soul yearns, even faints,
for the courts of the Lord;
my heart and my flesh cry out
for the living God.”
Psalm 84:2 NIV

The scripture in James 4:5 gives us a hint that God has placed a spirit in us that gives us the curiosity of seeking God.  Since these percentages are so high, we can state that the devil is not very convincing in getting people to not believe in God.

When God judges the righteous and the unrighteous and calls his church home to be with him, God will sentence people to heaven and to hell. 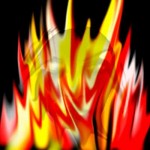 You can read about judgement day in Revelation 20:11-15.  A lot of people think that hell is going to be a party.  Their friends will be there and they can continue doing what they have been doing here on earth.  The bible says that hell is a place of torture, pain, suffering and extreme heat for eternity.  Many Americans don’t believe in hell.  A recent poll from USA Today states that only 59% believe in hell.  The devil is winning with this lie.  If a person doesn’t believe in hell, then they think they can live a Godless life without consequences.  No punishment for sin.

Why do many not believe in hell?  It may be because people who teach the Word shy away from teaching about hell.  They may do this to keep the attendance up or not to offend anyone.  God forbid.  Paul writes to Timothy in 2 Timothy 4:2 and says, “Preach the word; be prepared in season and out of season; correct rebuke and encourage – with great patience and careful instruction.”  NIV  Many people think that living a good life is the ticket to heaven, but that is not true.  Being a follower of Jesus the Christ and doing His will is the way to heaven.

You do not want to end up in hell.  Jesus teaches in Mark 9:43-60 that it would be better that you cut off body parts, like a hand or a foot, or remove your eye, if it causes you to sin than go to hell.  This was a very strict warning from Jesus.  Jesus is saying, hell is so bad, remove anything that might cause you to sin.

This is the lie that Satan is doing his best.  A survey of Christians in 2009, by the Barna Group, found that only 35% believe Satan is real.  The majority in this Christian group believe Satan is not real but a symbol of evil.  1 Peter 5:8 states, “Be alert and of sober mind.  Your enemy the devil prowls around like a roaring lion looking for someone to devour” NIV  The devil was in the beginning with Adam and Eve and tempted them in the garden.  THE DEVIL IS REAL.  At the beginning of Jesus’s ministry, Satan tempted Jesus.  Satan is the ruler of this world and he has helpers.  The Bible has numerous examples of demons.  Jesus spoke to them and they knew who Jesus was, the Son of God.  The scriptures say that even the demons believe that Jesus is the Christ.

The devil can really tempt you and lead you astray, if you don’t think he exists.   Christians have the power to make the devil leave by telling him to leave by the power of Jesus’s name.  The devil is a very very formidable foe.  Jesus even taught to be afraid of the devil when he spoke these words,

“Do not be afraid of those who kill the body but cannot kill the soul.
Rather, be afraid of the One (Satan) who can destroy both soul
and body in hell.”  Matthew 10:28 NIV

The devil is cursed and defeated when Christ was crucified and arose from the grave.  The only purpose the devil has today, is to take as many people to hell with him as possible.  God has given us free will.  Will we choose to follow God or the devil?